Crazy! CEO - Hari of Endurance International Group, owner of #Fatcow, has NOT yet provided ANY financial RESTITUTION for DESTROYING the extensive "underpinnings" of the HUGE Clicky: SOCIAL & BUSINESS NETWORKING CLUB at the Clicky.Buzz website for OVER 4 months now! (YES! Still destroyed as of Jan 1, 2016 - HAPPY NEW YEAR Clicky FANS!)

During the 3 month period of time (from Memorial weekend – Labor Day weekend) #Fatcow KEPT PROMISING they were fixing the issues created by the move - BUT NEVER DID (And, then just stopped all together - saying, it wasn't their problem anymore to fix what they destroyed)!

(As a web host – #Fatcow's ONLY job was to do a SIMPLE UPGRADE: "move/upgrade" the site from "Basic VPS" to "Business VPS" but, - the "COPY/MOVE/PASTE" was a total fiasco and #Fatcow destroyed the extensive underpinnings of the 6 year #ClickyBuzz website - leaving a trail of destruction on 2 separate CPanels - while creating a conjoined - inseparable MESS!!)

What does that say about EIG's "techs" if they cannot even do a simple upgrade "COPY/MOVE"?

#ClickyBuzz is an awesome Social & Business Networking site with 200 Thousand Products, Dating, Games, Phones, Chats, Blogs, Clubs and MORE - ALL created and designed by a Woman Entrepreneur - but, Hari’s #Fatcow has butchered it for 4 months, since Memorial Weekend - and, REFUSES to compensate for the extensive mutilation and down time of Clicky; and as of Oct 21, they still REFUSE to put the site back to the way it was - in perfect working condition, BEFORE they destroyed it. 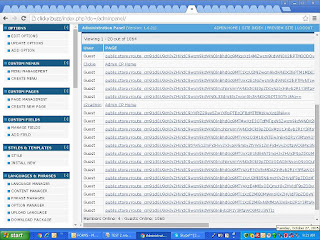 These are SAMPLES of how frustrating it is to our Clients who can NO LONGER JOIN Clicky or BUY from the ClickyStore 200 THOUSAND MEGA STORE product line or ClickyPhones - due to Hari Ravichandran’s Endurance International Group: #Fatcow 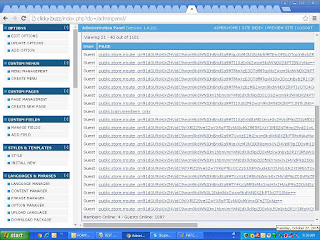 "THESE PEOPLE are despicable beyond words!" Quoted the Clicky web designer/developer. 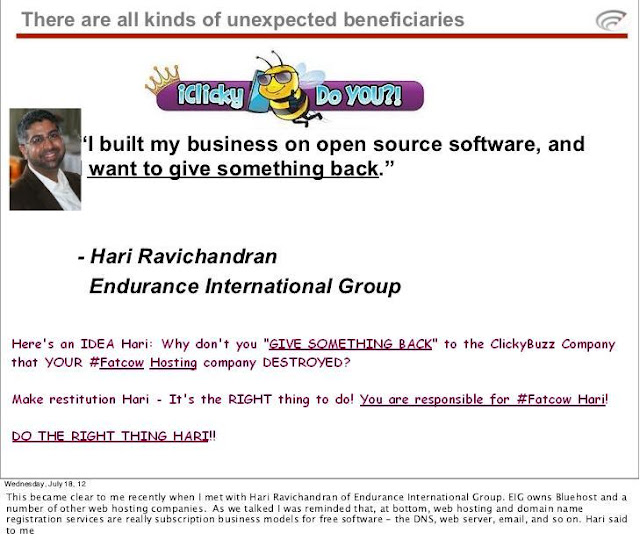 Gov't & bankers together with ALL the HOSTING, DOMAINS & EMAILS?
They will have absolute FREE access to ALL YOUR business data & ALL YOUR emails!

And - CONTROL/DELIVER all the gov't propaganda messages that you receive as well.
If the banks bought over 50% and *Hari SOLD 30%
Is ENDURANCE INTERNATIONAL GROUP / #EIG A SHAM? 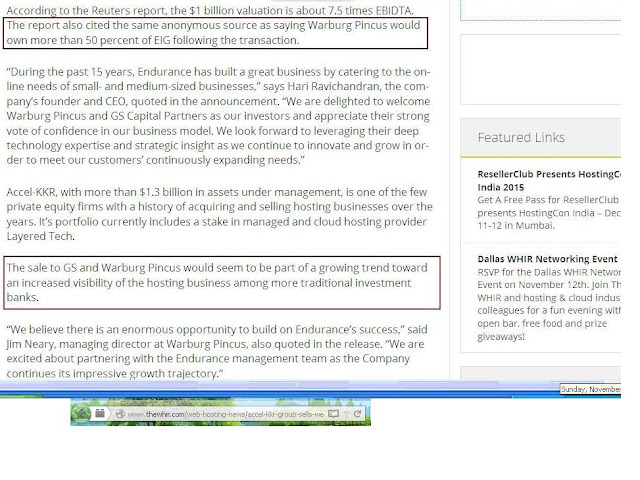 You'll risk losing everything you worked for while #Fatcow's

CEO, Hari Ravichandran gets “FAT” off of YOU!

Is this man clueless - or, just lacks integrity?

OR, Even MORE interesting - was/is Hari just a straw man for the government to BUY UP private Hosting companies in order to put them UNDER the government & bankers CONTROL?

(Who needs the NSA when all the gov't & bankers needed to do was join forces through "Private Entities" and BUY up ALL the HOSTING COMPANIES, DOMAINS, EMAILS ["CONSTANT CONTACT"] that already controls this information - WOW!!)

Why did Hari SELL off 30%  (And to who?)
AFTER gobbling up 32 hosting, domain & technical entities
GO PUBLIC - THEN SELL?

Why do top level BANKS OWN MORE than 40% of this Non-Performing Public COMPANY?

(Do THOSE names sound familiar?)
"Warburg Pincus and Goldman Sachs own more than 40 percent of the company." (*See page 11 .pdf)

And, why would ANY bank want to OWN a NON-PERFORMING COMPANY?

Was there a "deal" made? 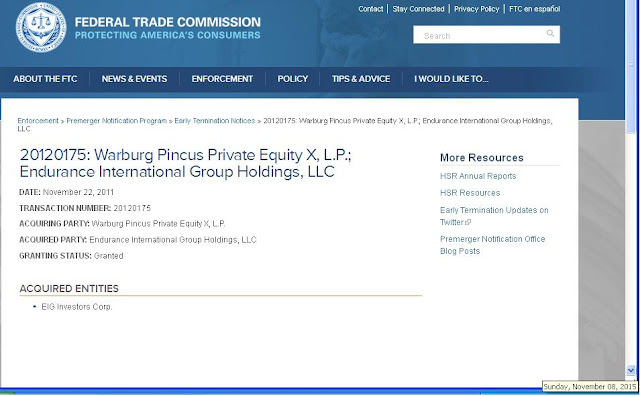 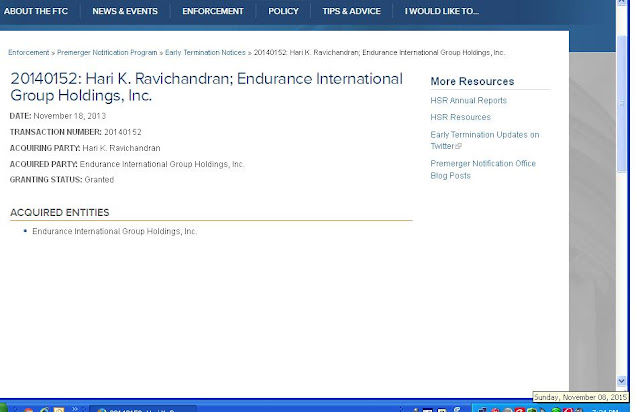 Who is the COO?

Why would a NON-PERFORMING HOSTING company need to hire a FORMER "Joint Chiefs of Staff" as COO? Isn't that just a LITTLE "TOP" HEAVY? Or, just heavy-handed...?

Managed the Joint Staff process for assessing future capability needs and approving development of major defense programs. Oversight for over $70B Department of Defense weapons systems.

Under the "GUISE" of helping "small businesses" (of course, NOT INCLUDING the ones that they [UN]INTENTIONALLY destroy) they have BUSTED into the college arena with an "educational" GLOBAL brainwashing "new age" agenda UNDER the pretense of "helping you GROW your [really - THEIR] business"!

Published: Aug 10, 2015 2:00 p.m. ET
(Ironically THEY [EIG - WARBURG et al] PUBLISHED THIS during the EXACT SAME MONTH that THEY DESTROYED the ClickyBuzz WEBSITE & Clicky's ENTIRE BUSINESS - GOING ON 6 MONTHS NOW....but, they "want" to "help" "SMALL BUSINESSES" - sure ya do Crappers on Tappers - help them right OUT the window - oops!)

Sad, but true...they are "helping" THOUSANDS of other small businesses in the exact same way!

Hummm....who is SHE connected to? Just a coincidence - nothing to see here...move along now.... 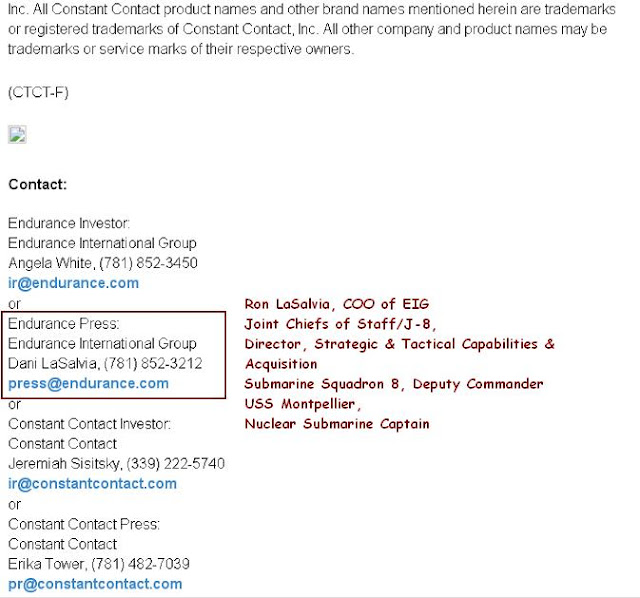 ALL of this most likely explains why Hari's Ravichandran, CEO of Endurance, has a TOTAL LACK of INTEREST in the PERFORMANCE of #Fatcow - or any other of the 32 Hosting, Domain and/or technical sites formerly bought or "owned" by Hari Ravichandran’s Endurance International Group.

This could ALSO explain why Hari Ravichandran’s Endurance HOSTING #Fatcow is run SO TOTALLY inefficiently; due to the *report/legal complaint attached that Endurance International Group is almost completely worthless now since it has GONE PUBLIC and been SOLD OFF - and, presumably under GOVERNMENT & BANKERS control!

#Fatcow is completely beyond HORRID!

#EIG has about 200 "techs" - really just glorified "receptionists" with zero to minimal technical skills (See Nov blog with example of #EIG "JOB" skill requirements). Apparently, when #EIG buys out a #Hosting Company, those good techs are replaced and then ALL calls go to one USELESS data call center. You'll typically speak to at least 20 of these LOW LEVEL techie/receptionists who know absolutely NOTHING about the issue or how to resolve the issue - never mind having ANY solutions whatsoever!

Pathetic doesn't even BEGIN to describe it!

This just makes for a "fabulous read - darling": - Endurance International Group[3] sold to Warburg Pincus for $1 billion in 2011

(tsk tsk tsk - someone blew up this link...I'll find you another one.)

(Just wondering out loud - If it's true that

Where did EIG get the $1.1 BILLION to buy #ConstantContact?

Question Hari/EIG: "WHO'S YOUR DADDY"?

These "characters" PRETEND to work for "Fatcow/Endurance"
as "escalation managers" Really? Is that even true?

Who ARE these People & WHO do they REALLY Represent?

Do YOU know them?

Help US SOLVE this MYSTERY 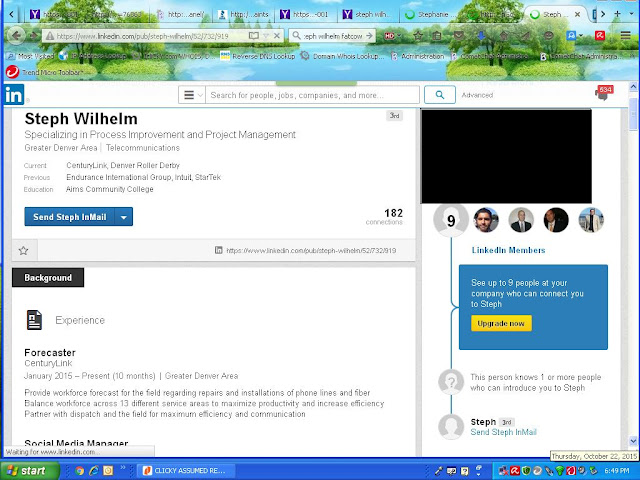 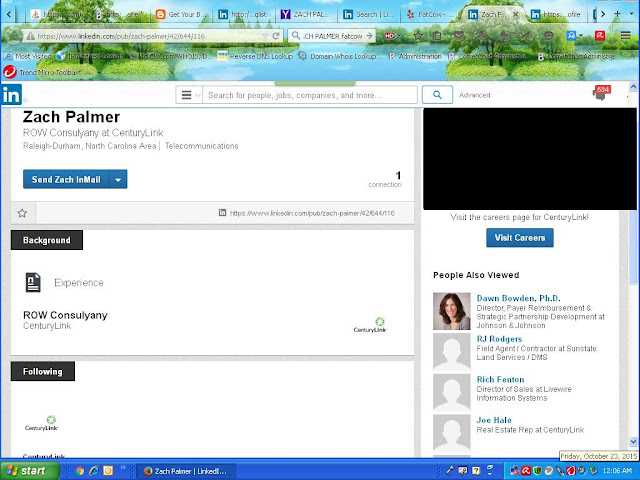 As of TODAY's DATE

(No worries - we posted the ORIGINAL screen shots here in this post.)

Change the YEAR & DATES? Why?!

Especially the connection to: "CenturyLink"!!

Based out of Colorado - the "hotbed" of activity for the brand new NWO masonic / gargoyle airport - also, just happens to be where Obama gave his acceptance speech perched on a replica of the Temple of Pergamon (revival of the Ottoman Empire) - the "Throne of Satan" the seat where Satan sits...humm humm hummm.

If the #Fatcow techs/call center is based in Arizona - then, why does Stephie booboo - listed here as working in Colorado/CenturyLink?

It just keeps getting more & more interesting all the time...doesn't it? 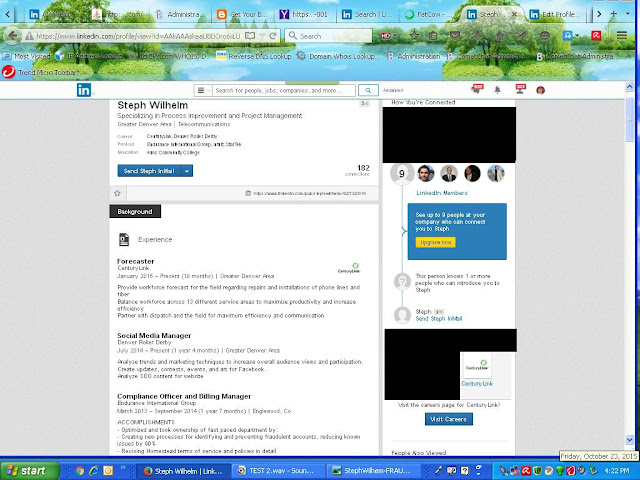 We did find the linking connection to CenturyLink!

You can see it here UNDER 1996 info: http://click2connect-clickybuzz.blogspot.com/2015/10/business-is-game-played-for-fantastic.html

IT'S ALL ONE BIG FRAUD/SHAM/SCAM!!


And, maybe even worse: a gov't/banker collusion....

Yes, my fellow chaps - the plot thickens as they say.

Well, well well...What do we have here? 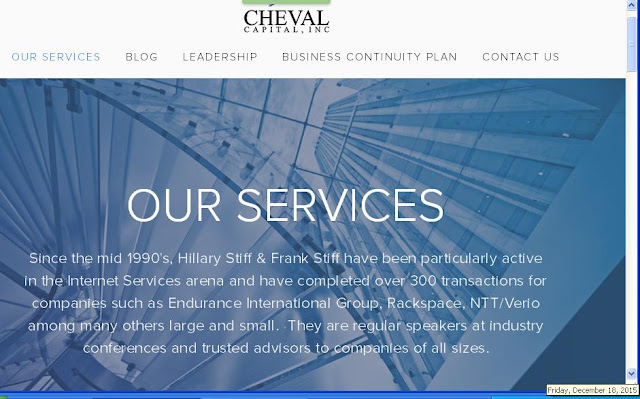 Since the 1990's have been BUSY LITTLE "Buzz Buzz BEES"
Same exact time period that's quoted above in the Reuter's Report
SEE: REUTER'S IMAGE ABOVE

These not so innocent love birds "have been particularly active in the INTERNET SERVICES ARENA and have COMPLETED over 300 transactions for companies such as: ENDURANCE INTERNATIONAL GROUP, Rackspace, NTT/VERIO..."

And, would YOU guess that "Verio" [VOIP] was ONE of the exact company's that Clicky saw Gary Engel, Senior Vice President of Customer Service & Sales of ENDURANCE INTERNATIONAL GROUP advertising for on Twitter! Yes!

One GUESS as to WHERE it's located...come on now - YEP! YOU guessed it: COLORADO!

So, If "Verio" is there in Colorado as is Stephie BooBoo - ALONG WITH CenturyLink....where she works...the puzzle pieces are all "linking" together...

THEY: "speak at industry conferences and represent Hosters by lobbying on Capitol Hill for the Internet Infrastructure Coalition"

DANGEROUSLY CONTROLLING - THEY COLLUDE to merge & gobble up the entire GLOBAL INTERNET & VOIP STRUCTURE while putting GOVERNMENT RESTRICTIONS on YOU & SMALLER entities NOT linked into their ClickyWeb "Clique" - FREEZING YOU OUT OF BUSINESS!
Posted by Clicky.Buzz at 1:53 PM

Mastermind Investors - BE THE BANK!

Are YOU Curious about Investing & Leveraging YOUR Assets? Would you like to learn how?